Back in 1999 when Ebay was creating an international gathering place at which to ooh and ahh anything worth collecting, Gia Carangi fans started to come out of the woodwork.  Magazine trading became a brisk business.  Gia’s sexy Cosmo and Vogue covers.  Her editorials.  Her Christian Dior and Versace ads.  Even sewing pattern packets on which Gia appeared in her early modeling days.

Here’s screen capture of one of the highest-selling items to date: the January 1980 issue of Philadelphia magazine featuring Gia Carangi on the cover.  “80 Hot People to Watch”.  The auction ended January 15, 2007.  Two bidders duked it out.  In the end, it sold for a whopping $510.00. 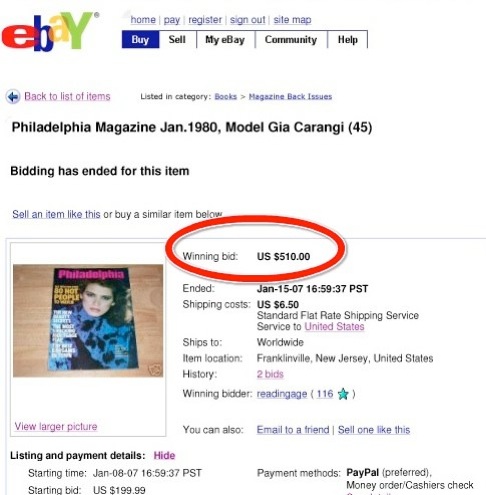